This is the inaugural release under Daniel Horner’s DH3 brand in conjunction with SIG SAUER; the M400-DH3 has been designed by Horner in collaboration with the SIG SAUER research and development team and is the rifle used by Horner in 3-Gun and multi-gun competition.

Since Daniel Horner joined Team SIG, he has methodically been researching, designing, and testing the products he will be introducing through the DH3 brand from SIG SAUER. These are not just products that bear his name, but are the products that have been tried, tested and used by him personally. Daniel puts the full force of his name and his distinguished career in the shooting sports behind this new rifle.

The M400-DH3 is the first product in this DH3 product line-up and achieves both the performance and precision that he is known for as one of the world’s most dominant world championship shooters.

Team SIG’s Daniel Horner is regarded as the top multi-gun and 3-gun shooter in the world. Daniel began his professional shooting career as a member of the elite U.S. Army Marksmanship Until rising to become the Coach of the USAMU Action Shooting Team and during his career was twice selected as the Military Marksmanship Association Soldier of the Year. He has captured over 125 championship titles at the world, national, regional, and state level, including 16 Multi-Gun / 3-Gun Championships, 8 Sniper Championships, 2 IDPA National Championships, an IPSC Shotgun National Championship, an NRA World Shooting Championship, and hundreds of additional national and major title wins throughout his career.

For the past two years I have been shooting in competition with the M400-DH3 rifle and what you get right out of the box is my set-up. We took our time to release this gun because I wanted all the elements to be my competition set-up from my trigger to the stock. I’ve won multiple titles with this exact build and even if you’re not taking it into competition, you are sure to enjoy the custom features that we have put into the M400-DH3.

The M400-DH3 Rifle is a SIG Direct Impingement (SDI) aluminum frame rifle with a Cerakote Elite Titanium finish with the DH3 fully adjustable competition stock and a 2-stage adjustable Timney™ Daniel Horner signature trigger. This competition platform features a 16” fluted stainless 223 WYLDE barrel for optimal 223REM or 5.56 performance with a three-chamber compensator for recoil mitigation, low-profile 3-gun handguard with M-LOK™ mounts for easy accessory attachment, ambidextrous controls including bolt catch/release, and ships with one 30-round magazine.

The SIG SAUER M400-DH3 rifle is now shipping and available at retailers. 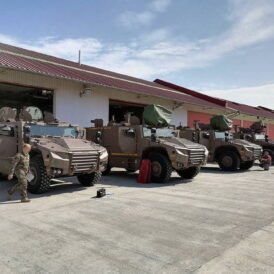