9 mm NATO Fabryka Broni VIS 100 M1 is a semi-automatic full-sized service pistol based on standard issue VIS 100 military duty pistol know earlier as PR-15 or Ragun. Hammer-fired, short recoil operated, locked breech gun with Single Action/Double Action (SA/DA) trigger. It is fully ambidextrous as all controls, such as magazine release lever, decocker and slide stop are placed on both sides of the handgun . The slightly curved trigger guard was shaped for shooting with both hands and it was enlarged for shooting in gloves.

The FB VIS 100 M1 comes with a commercial off-the-shelf open-style iron sights with fiber optics supplied by Italian LPA. They can be easily replaced with other sights with similar footprint.

The grip is ergonomically shaped and comes with two sets of interchangeable back straps for individual adjustments.The aircraft grade aluminium frame features an MIL-STD-1913/Picatinny rail for weapon light or laser pointer.

In the rear part of the stainless steel slide there is a factory-milled cut for now very popular micro-sized red dot sights. Pistol comes with a single adapter plate compatible with Docter/Noblex/JP, Shield RMS, Delta Optical, Burris Fastfire, Vortex Viper or Venom micro RDS or other models with similar footprint. Unfortunately, owners of Trijicon RMR or Aimpoint ACRO P-1/C-1 have to wait a bit. A cover plate comes with the pistol for those who prefer classy irons.

Pistol does have internal safety systems only, The de-cocker, which allows the shooter to lower the hammer safely, while there is a round in the chamber. When the de-cocking occurs, the hammer is lowered but it still stays away from the firing pin.

The safety notch prevents the hammer from striking the firing pin accidentally.The firing pin has its own safety, which makes sure that the pin will not move forward. That is, until the trigger is pulled, at which time the safety is removed and the pin is pushed forward to meet the primer. This third safety is also the gun’s drop safety.

The latest VIS 100 M1 has its roots in MAG-95 and MAG-98 pistols developed by Marian Gryszkiewicz in the 1990s. Front the outside, all the pistols are quite similar but completely different internally. The Fabryka Broni VIS100 M1 is completely not compatible with MAG-95/98 and none of the parts can be used interchangeably.

VIS 100 M1 comes with 17 rounds magazines which can be converted with a flat base pad to 15 rounds. This will decrease the overall height of the loaded gun. Also, the spring of the magazine must be replaced. Both spring and base pads come with the gun.

As mentioned in the opening, the VIS100 M1 is a commercial variant of military VIS100. There are some slight differences between these two pistols:

The trigger seems to be slightly different than in the MIL-SPEC variant.

The reasons why the commercially available pistol had to be different than the military one are resulting from the project funding requirements. Some of the R&D funding of the VIS100 duty pistol came from European Union programs and the rules of the programs prohibited commercial sales of the firearms identical to the military ones.

VIS100 M1 has an engraved logo on the slide, which resembles the one found on the grip handles of the legendary 9 mm VIS wz. 35 pistol from the 1930s. There is also a Polish Eagle engraved on the frame – the military pistol does not have any of these engravings.

The MSRP of VIS 100 M1 is 2599 PLN (approx. 590 EUR or 670 USD on the day of the release). The gun comes with a polymer box, two 17 round magazines (with 15 rounds conversion kits), additional backstrap, micro RDS adapter plate and simple cleaning kit. Available now in selected gun stores in Poland. Unfortunately, we don’t have idea when it is going to be available outside of Poland. 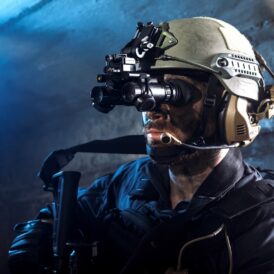