ZeroEyes, Inc., creators of the only A.I.-based gun detection video analytics platform that holds the US Department of Homeland Security SAFETY Act Designation, today announced a formal partnership with Asylon Robotics, a firm that automates security operations by leveraging aerial and ground robotics for perimeter and drone security and intelligence services.

The number of law enforcement officers killed intentionally in the line of duty reached a 20-year high in 2021, with gunfire being the leading cause of officer deaths. This concerning statistic underlines the need for autonomous, real-time intelligence in active shooter events to react faster to protecting civilians and law enforcement personnel alike.

Our grandparents and parents had nuclear attack drills from foreign threats, and we adults had fire drills growing up. Our children today have active shooter drills – things aren’t heading in the right direction.

Enabling our A.I. gun detection technology for use beyond static video cameras is a huge step in combating the mass shooting epidemic that our country faces. Our partnership with Asylon Robotics means we’re able to outfit unmanned vehicles with real-time gun detection intel and tools such as lights and audible alarms to distract shooters, giving first responders time to respond to threats more quickly and safely from the air or on the ground, when every second counts.

All of Asylon’s solutions are built to increase safety and enable the security operations center of the future. Partnering with ZeroEyes to integrate its A.I. gun detection solution into our DroneCore platform is a huge step forward in making that happen.

Our partnership means we have a more complete solution for customers to safely and intelligently respond to incidents on their properties, such as active shooter scenarios. Adding A.I. gun detection to air and ground security robotics is industry-first and directly in line with our mission to help get the right intel to the right people to make better, faster, and smarter decisions. 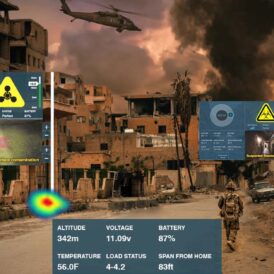