According to Italian and German governments’ requirements, the companies Diehl Defence and Leonardo developed and qualified the precision-guided ammunition family Vulcano 127 and 155 mm. Compatibility with all 127 mm and 155 mm weapon systems is ensured.

During the fielding, the German Navy successfully completed the operational suitability test of the Vulcano 127mm guided ammunition, fired from frigate F125 with Leonardo’s 127/64 Lightweight naval gun. This comprises the whole ammunition flow in the weapon, including programming and firing with proof of range and precision under operating conditions.

Besides the basic configuration with a Height of Burst (HoB) sensor, other configurations were qualified, with terminal homing sensors SAL (Semi-Active Laser) and FarIR (Far Infrared), which are deployed against stationary and moving single targets with highest accuracy.

This makes the Vulcano family the most accurate artillery ammunition for land and naval applications worldwide.

LYNCEA DEFEND was created to defend vessels from typical asymmetrical threats from air, sea and land

Thereby, not only the Italian Navy will be equipped with Vulcano 127 guided ammunition as these successful tests pave the way for the German Navy to adopt the system as well. 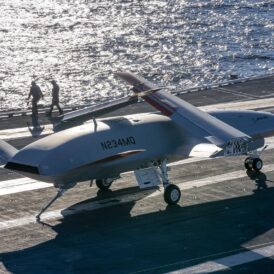