Stoeger Canada with SAKO, Finland will begin deliveries of the Multi Calibre Sniper Weapon (MCSW) that will allow the use of various calibres to meet the operational and training needs of the Canadian Army. The bolt-action sniper rifle system allows the user to swap between calibres while maintaining the same fit, form and functions provided by the common frame and accessories.

We are extremely pleased to have been selected by the Canadian Department of National Defence to supply with Stoeger Canada the next generation of sniper rifles to the Canadian Army. This significant project emphasizes our commitment to supporting Canadian defence and law enforcement organizations.

The Sako TRG M10 bolt-action sniper rifle is a multiple caliber, manually operated, and magazine-fed system. Its fully adjustable stock and interchangeable barrel/bolt system, among other features, make it a multi-functional system in a single weapon, suitable for any operational situation. The rifle includes ambidextrous controls and tactile indicators for different calibres. Furthermore, its action frame and barrels are cold hammer-forged from special alloyed steel for extra rigidity. The rifle underwent extensive and arduous testing by the DND during trial phases, passing all tests and showcasing the performance that has earned SAKO its worldwide reputation.

Sako’s commitment to great products that meet the needs of defence forces worldwide continues in Canada as we deliver the SAKO TRG M10 as the MCSW, satisfying long and medium range sniper needs with the multi-calibre capability. The contract award is especially timely as SAKO celebrated its 100th anniversary. It is a proud moment for both Stoeger Canada and SAKO, Finland on this important project. 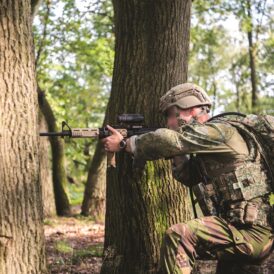