Photonis has been awarded a major contract by the NSPA

The Photonis 4G image intensifier tubes – the latest state-of-the-art technology in night vision – have been selected for a 1,400+ piece contract for a major European Air Force.

With this contract, Photonis reinforces its market position as a key supplier of high performance image intensifiers in Europe. The image intensifiers will serve to upgrade an existing fleet of about 700 avionics binoculars for pilots and helicopter crews.

More and more military operations are taking place at night – which is essential to maintain a tactical advantage in DRI (Detection, Recognition and Identification) – and Photonis is the only manufacturer in the European Union able to produce such high-performance products in large volumes. To receive the trust and approval for such an important contract is a great honor and a confirmation of high quality products.

Moreover, the 4G brings a very high FOM (Figure Of Merit) and two other major advantages which all combined make the 4G technology extremely efficient: a super-fast Auto-Gating and a reduced halo of light providing operators with a less glaring image which for helicopters pilots is a key advantage.

Continuity and change: Rheinmetall presents the HX3, a new generation of tactical trucks

Photonis’ 4G image intensifiers provide an advantage over the competition, in particular a constant resolution at high light levels (very clear image), unlike other products whose resolution drops at higher light levels. It is again a tactical advantage for pilots flying above urban zones.

Photonis’ headquarters are based in Bordeaux in France and its manufacturing facilities are located both in France and The Netherlands. Photonis employs approximately 1,000 people worldwide and is world renowned for its high performance image intensification technology. Photonis is a prime contractor for all NATO countries and affiliates and its image intensifiers are deployed worldwide. 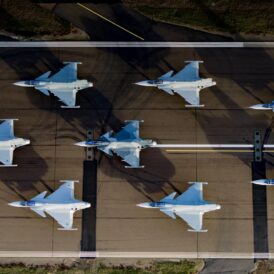