The European leading robotics and autonomous systems developer Milrem Robotics will support the upgrade of the Estonian Defence Forces CV90 Infantry Fighting Vehicles with engineering expertise as part of a consortium led by Go Craft and Scania Estonia.

In June 2021 the Estonian Centre of Defence Investment awarded Go Craft and Scania Estonia a 29,3 MEUR contract for upgrading 37 CV90 vehicles procured from Norway in 2016.

Over the next two years, the companies with the support of Milrem Robotics will refurbish all 37 CV90’s and convert 31 into different types of supporting vehicles, including fire support, engineering, and anti-tank roles, specifically based on the need of the Estonian Defence Forces 1st Infantry Brigade Scouts Battalion.

Milrem Robotics has developed extensive engineering competence over the last 8 years. We have a strong team in the Nordic countries with competence not only in autonomous navigation, but as well in hybrid drive, electrical and mechanical engineering, and systems integration. The Type-X Robotic Combat Vehicle is proof of these competences. This CV90 project is a good example that we can work with more traditional and manned vehicles as well.

Entrusting Go Craft with this technically extremely demanding work is a great recognition of our work so far and we take the responsibility seriously. As the technical task and work effort in the given time frame is ambitious, we have supplemented our team and chosen sub-contractors to support our mission. Milrem Robotics was the best choice to lead the mechanical engineering process to make the final design with the needed and chosen components according to all military standards and as ergonomic and user friendly.

The CV90 support vehicles rebuild programme is the most complicated engineering project entrusted to the Estonian defence industry. This fact illustrates the maturity of our industry to handle large scale and complex defence projects. Milrem Robotics can definitely be considered as a flagship of those industrial capabilities and we are waiting forward to cooperating with them during the design phase of the project.

Milrem Robotics is the European leading robotics and autonomous systems developer and systems integrator. The company is mostly known for its THeMIS Unmanned Ground Vehicle intended to support dismounted troops and the Type-X Robotic Combat Vehicle, a wingman for mechanized units.

Milrem Robotics is the leader of a consortium that was awarded 30,6 MEUR from the European Commission’s European Defence Industrial Development Programme (EDIDP) to develop a European standardized unmanned ground system (UGS). 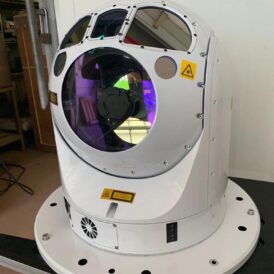