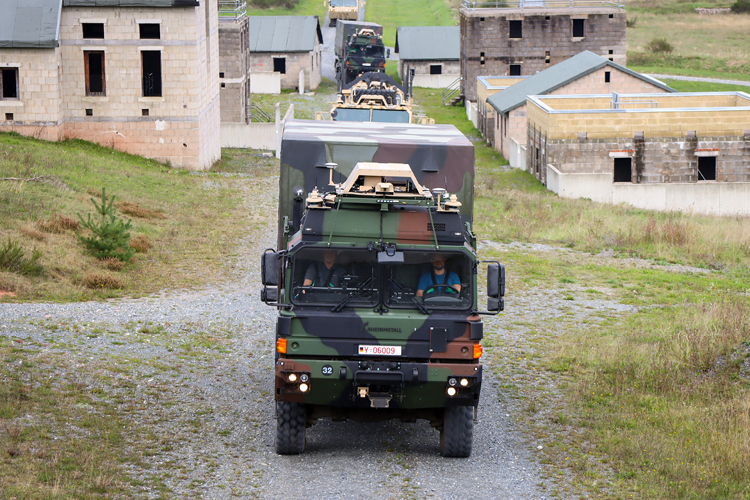 On behalf of Germany’s Federal Office for Bundeswehr Equipment, Information Technology and In-Service Support (BAAINBw), Rheinmetall is currently conducting the InterRoC research and technology project. The abbreviation stands for Interoperable Robotic Convoy. In the last weeks, the impressive capabilities of this high-tech approach to autonomous driving were on display at two remarkable events.

The InterRoC project encompasses two HX2 military trucks from Rheinmetall, each equipped with an autonomy kit, and which alternate in accordance with the leader-follower principle. With this principle, the first vehicle is always driven manually, while the pursuit truck (or trucks) drives autonomously in its path. These are manned only by a backup driver, who can intervene in case of a malfunction. Here, it is not just the so-called primary functions, such as steering and accelerating, that are controllable; secondary functions like starting the engine, the lights, differential locks, etc., are as well. The current project uses an autonomy kit (A-Kit) furnished by the German authorities, and originally provided by the US government under a project agreement. Rheinmetall’s role in the programme includes modifying the basic vehicles and integrating the autonomy function, together with commissioning and testing.

As part of its Autonomous Ground Resupply (AGR) project, the US Army uses the same A-kits in its Oshkosh trucks that Rheinmetall uses for InterRoC. This makes mixed US-German convoys possible. This was tested in an operational demonstration (OPDEMO) from 26 September to 7 October at the US Army’s Grafenwöhr Training Area in Bavaria.

The intensive preparations paid off, with the first two-vehicle convoy already on the move the second day. During these two weeks, a convoy consisting of five vehicles tested every conceivable operating mode of the system in multiple variants. In the process, 1,051 km were driven autonomously. It is worth noting that the entire convoy overcame a gradient of 40 percent, with the A-Kit operating the differential locks.

Furthermore, the vehicles were able to operate continuously for over 75 minutes without manual intervention. The maximum convoy length was 1,100 metres.

All in all, the tests turned out to be a complete success for everyone involved, resulting in numerous valuable findings.

ELROB is Europe’s toughest field test for unmanned systems. It is an open, multinational competition in the realm of robotics, sensors and autonomy, drawing participants from universities as well as civilian industry and the defence sector. It takes place every two years at a military installation. This year’s event was held at an exercise area near Vienna, 30 May to 3 June.

Participants have to contend with various scenarios and overcome multiple challenges, conceived in close cooperation with military users. Completion of the tasks is evaluated by a team of experts.

Participating for the first time with the InterRoC research and technology project in the event’s Convoying category, Rheinmetall’s small team took second place, finishing behind the University of the Bundeswehr in Munich.

This year’s challenges strained the specified capabilities of the vehicles and A-Kit alike, but the creative Rheinmetall team, reinforced by colleagues from RMMV Austria, largely succeeded in overcoming these.

In addition to the evaluated scenarios, Rheinmetall also carried out an autonomous driving presentation for a throng of interested visitors at the test site. The vehicles clearly captured the crowd’s imagination and proved highly popular. 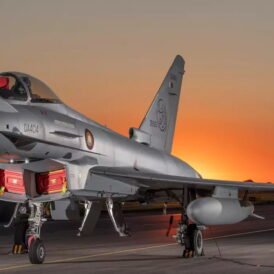