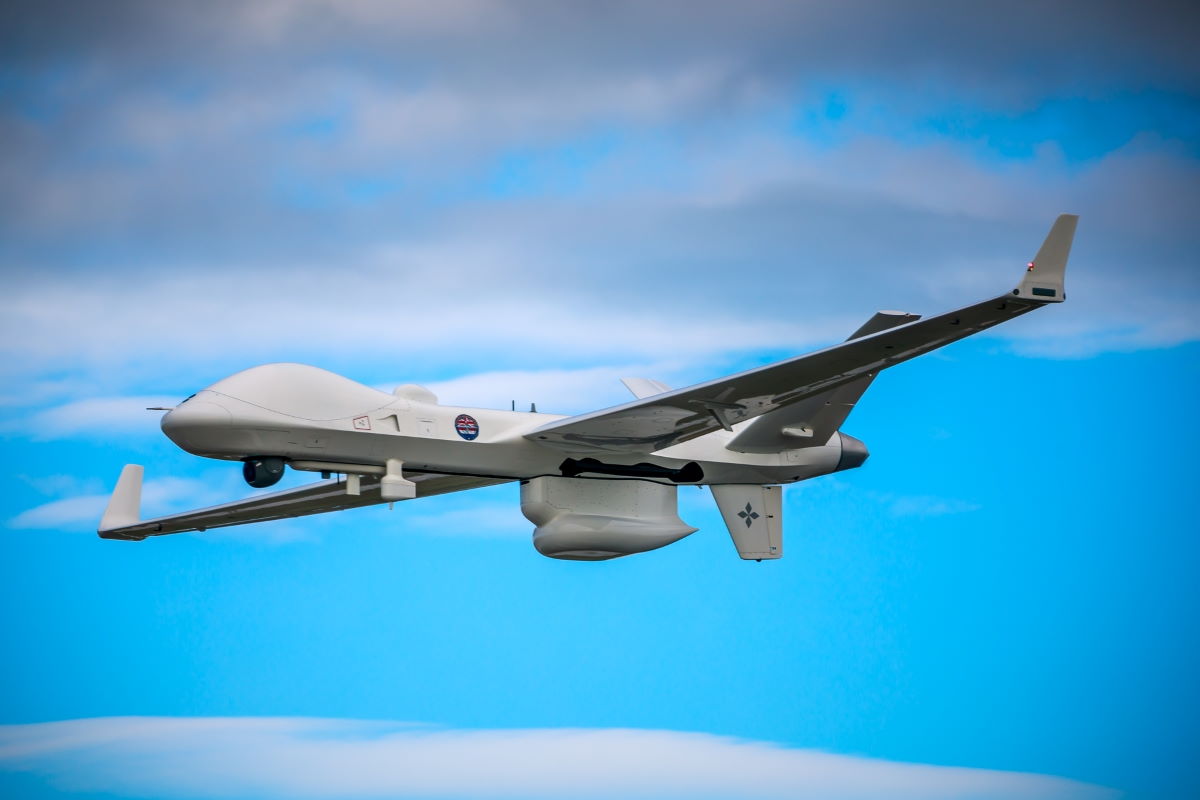 The support of the RAF was key to the success of our demonstrations. Our partnership allowed us to achieve a number of industry firsts as we showcased our innovative RPA to senior military officials from 16 countries.

The flights showcased the many operational capabilities of the MQ-9B, including the platform’s advanced maritime Intelligence, Surveillance and Reconnaissance (ISR), Detect and Avoid System (DAAS), industry-leading endurance and interoperability with NATO partners. During Joint Warrior, a demonstration of Manned-Unmanned Teaming (MUM-T) took place using the SeaGuardian and an RAF P-8, showing SeaGuardian’s ability to compliment and support Anti-Submarine Warfare (ASW) tasking, which included tracking, monitoring and reporting of sonobuoys.

The demonstrations were initially based out of RAF Waddington before moving to RAF Lossiemouth to support Joint Warrior. While based at RAF Waddington, one flight saw SeaGuardian fly to Leeuwarden Air Base, taking the RPA into Netherlands airspace and proving a seamless transition between national air traffic regions, while testing airspace operational procedures. This multi-day demonstration, which took place Sept. 1-2, displayed SeaGuardian’s maritime surveillance capabilities in support of international allies. The Royal Netherlands Air Force has ordered four MQ-9A RPA and the first is expected to be delivered to Leeuwarden later this year. SeaGuardian returned to RAF Waddington at the conclusion of the event.

That important event was followed by the UK’s first Civil Aviation Authority (CAA)-approved point-to-point domestic flight of an unmanned aircraft using the UK’s airways structure, when SeaGuardian flew from Lincolnshire, England, to Moray, Scotland, on Sept. 12. The flight was controlled by NATS, the UK’s civilian Air Navigation Service Provider.

The MQ-9B is the first RPA to be allowed to fly so extensively in UK-controlled airspace. This moves us a long way towards same-day notification for ‘file and fly’ privileges as an Instrument Meteorological Conditions (IMC)-capable platform.

A large set of airworthiness artifacts have been reviewed by the UK Civil Airworthiness Authority, which has approved MQ-9B for operations in unsegregated, uncontrolled airspace for the first time based on the suite of airspace deconfliction technologies and extensive documentation provided in the Safety Case.

SeaGuardian is the maritime version of the MQ-9B SkyGuardian®. As the launch customer, RAF has ordered 16 aircraft in their configuration, which they have named the Protector RG Mk1 RPA systems. The Protector is a derivative of the SkyGuardian, featuring an array of customer modifications.

The coordination between GA-ASI and our RAF team was exciting to see. It was great to see first-hand the game-changing capabilities of the RPA we’ve ordered for Protector. The ability of the aircraft to integrate into European airspace is key for the RAF as well as our international allies.

The flights culminated with the RPA’s participation in the UK-led Joint Warrior exercise, which showcased how the MQ-9B’s maritime capabilities can be integrated with other air, maritime and land assets. An international audience observed the RPA’s maritime capability which includes a multi-mode surface-search radar with Inverse Synthetic Aperture Radar (ISAR) imaging mode, an Automatic Identification System (AIS) receiver, Electronic Support Measures (ESM) along with the standard High-Definition, Full-Motion Video sensor equipped with optical and infrared cameras. As a result of a visit from leadership from the UK Border Force during which they observed the capabilities of the system, a Military Aid to Civil Authorities (MACA) demonstration flight was performed over the English Channel.

Thales on board France’s 169 Guépard helicopters

In support of the European Maritime Demonstrations, GA-ASI partnered with SES, the leading provider of global satellite communications (SATCOM) services operating the world’s only multi-orbit constellation of satellites in Geostationary Orbit (GEO) and Medium Earth Orbit (MEO), and offering a unique combination of global coverage and high performance. For the demos, GA-ASI leveraged SES’s GEO connectivity in Ku-band as well as X-band reachback provided via the GovSat-1 satellite. GovSat-1, which is exclusively dedicated for government use and offers secure multi-mission capabilities, is operated as a public-private joint venture between the Government of Luxembourg and SES. The SATCOM service enabled the MQ-9 to operate securely with a high-capacity datalink, allowing real-time transmission of sensor data from the aircraft and operations center using a SATCOM link, including with data rates up to 70 Mbps in secure reachback.

With our global satellite connectivity services, SES has been supporting the critical needs of GA-ASI and their government customers for almost two decades, and we’re delighted to take part in this demonstration effort as part of our long-standing relationship with General Atomics. As our customer needs evolve and require increasingly secure, flexible and high-performance services for real-time data exchange and reachback, we are happy to leverage our existing capabilities and to further innovate with the next-generation high-throughput systems like O3b mPOWER, enabling network sovereignty and cloud-scale applications that governments are looking for.

Will Tong, Vice President of Strategic Government Initiatives and Head of the Aero ISR market at SES Networks